I meant to give this homily on good friday, but the Holy Spirit thought otherwise. so here it is. Something surprising and interesting happened at the beginning of Jesus’ passion narrative of Good Friday. As they came to arrest Jesus, he asked the soldiers: “who are you looking for?” they said Jesus of Nazareth. He identified himself as I AM. They all fell to their faces. Imagine that—someone came to hurt you and you know it, and that person fell at your feet. What would you do? someone is bullying you at work. Someone attacks your family. well, you would probably react the way Peter had in the garden. Once the soldiers laid him on Jesus, Peter cut off the ear of one of the soldiers– fight. Or you would react the way the other apostles did– overwhelmed and helpless, they fled in fear. So basically when people are met with violence—the two typical ways they react are—fight/ defend themselves, or flight/ run away.

As we commemorate the great day of our salvation, the day we call “Good Friday” despite, I want you to notice that Jesus did neither. In so doing, he shows us a third/ nonviolent/ more effective way to deal with violence. 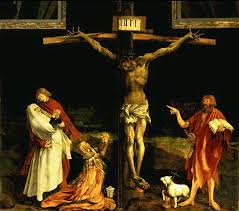 Today as he was being led to the cross, he responds nonviolently. Father forgive them… like a lamb led to the slaughter he opened not his mouth. Though all-powerful, he became weak like us. He is thus nonviolent thru and thru.

What do we learn here? Nonviolence is more powerful than violence. Let me give you a few examples to illustrate how effective nonviolence is.

during a period of racial unrest in South Africa, Bishop Desmond Tutu came face to face with a white racist man. The man said, “clear the way because I don’t make way for gorilla”. Tutu got off the sidewalk and says: I do.

when the communists were in power in Poland in 1979. The government stifled all freedom of speech in public or private. On a pilgrimage as pope, JPII spoke of God, human rights, and religious freedom. as he was speaking, the crowd started to sing “we want god 2x. the chant went on for 14 minutes. a few months later, communism in Poland was no more. that’s the power of nonviolence.

Notice the common thread in all in all these examples– they neither fight nor flight; rather, they hold their ground. They mirrored back to the violent person their violence and refuse to approve it. That’s what it means to turn the other cheek. That’s what Christ did thru his passion. That’s what we are called to do. May this be your model as you face bad people.

May this inspire you to stand for truth, righteousness, and the vulnerable.