We are not allowed to fail in loving. We are made to love. Every learning, experience, study should deepen our knowledge and will to love. We will be judged on love. So, as the church is looking for new ways to spiritually re-awaken the faithful who are drunk with the wine of secularism and indifference, it is only if we teach them how to love concretely that they will be sobered up. Who but St. Therese is better fitted for that task since it was she who brought to light the idea of doing small things with incredible amount of love. Therese of Lisieux is the saint of love. Although all the saints became saints as a result of love, it is Therese who emphasized for us how to practice love. What is her understanding of charity?

She believed Jesus’ command at the Last Supper — love one another as I have loved you— constitutes the Magna Carta of our faith. How we live this reveals our identity.[1] She noticed that Jesus did not love his disciples for their natural qualities; they were poor uneducated fishermen while he was eternal wisdom. He loved them because he wanted them to enjoy the kingdom. We too must become students in the school of love and master every aspect of it in our striving to become true disciples. Thus, she discovered a new insight about charity. “True charity consists in bearing with the defects of others, in not being surprised at their weakness, but edified at their smallest virtues. Above all I know that charity must not remain shut up in the heart, for “No one lights a candle, and puts it in a hidden place”.”[2] That means we must be charitable not only to those who are dear to us, but also to all without distinction. Unlike the old law which commands us to love our neighbors as we love ourselves, the new commandment given by Jesus urges us to love them as Jesus himself loves them i.e. more than ourselves.[3] 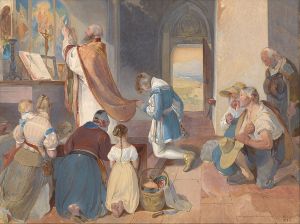 Marred by weaknesses and imperfections, unless Jesus loves in us, we cannot love others as Jesus loves us.[4] Thus grace becomes the epicenter of this commandment; grace empowers us to do what we would not otherwise be able to do on our own. So, frequent participation in the sacraments becomes crucial because they are the source of grace. As Aquinas shows, “the Sacraments are necessary for our salvation since it’s the only healing remedy against the disease of sin”.[5] Since we are living in the age of the new evangelization, if it is to be successful, practical love as developed by St. Therese and the celebration of the sacraments will have to go hand in hand.

Charity is concretized in how we approach every act. As she puts it, “it is not enough [to say we] love; we must prove it”.[6] That proof will happen under trials sometimes. The more united we are to Jesus the deeper we can love. So when we see defects in others, if we look at them with the eyes of love, we automatically see their virtues and good intentions.[7] She called that “small victories in the battlefield”. For example, in the convent where she lived, there was a sister who had the gift of displeasing Therese in her ways, words, and character. She could not stand her. She decides to practice charity toward her because “charity does not consist in feelings, but in works”;[8] she decided to do for that sister what she would do for the person she loved the most”.[9] So every time she meets her, she prays for her. When sister says something that was hurtful, instead of responding, Therese would smile most charmingly, or if she could, she’d change the conversation for as she sees it, “arguments don’t change hearts”.[10] If she could not resist the sister in her hurtful manner, she would run away like a coward to avoid sinning. She became victorious over that temptation through prayer, kindness, and virtuous cowardice. By preferring to see the sister as Jesus sees her, Therese knew she was pleasing Jesus for “just like an artist is pleased to receive praise for his work, the divine artist is pleased when we don’t stop at the exterior, but penetrate the inner sanctuary of his work where he dwells”.[11] Therese practiced that love so well, one day that sister asks Therese, “what attracts you so much toward me? Every time you look at me, you smile”. Success! 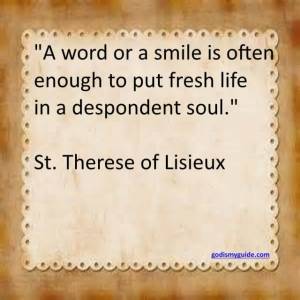 Charity penetrates even the most hardened hearts; it heals even the most wounded; it soothes and frees the soul to focus on its natural inclination. Therese overcomes her temptations by mean of love. Charity changes mind and heart. It opens doors. She focused in growing in personal love, then that affects those around her drastically; love is irresistible; confronting the sister would create more friction and pain. Fraternal correction would only hurt her pride. How many today are wounded, broken, bruised, abused, and used because they don’t know how to love? Instead of detesting that sister, who gave her at first every chance to do so, she prefers to see Jesus hidden n the depths of her soul.[12] Would you like to change a bad coworker, neighbor, friend, unleash the power of love within you and participate in the sacraments very frequently, then wait to see marvel. How many people going to church regularly don’t know how best to live the truth? To be a Christian is the result of an encounter with the person of Jesus; that encounter should give a radical direction to our lives.

What am I talking about? Are there examples out there of that concrete love I am talking about? Maximilian Kolbe manifested that love at Auschwitz when he replaced father of three who was chosen to die. It is alive in St. Gianna Mollo’s daughter for whom she gave up her life. it is alive in those who strive to love the poor. we can touch in parents who sacrifice everything out of love for their family.

Lastly, charity is an interior disposition manifested externally. Performing many actions for others without interiorly disposed is not charity; in her words, “when charity has buried its roots deeply in the soul, it shows itself externally”.[13] So there can be charity in refusing to do for someone what cannot be done. It all depends of the disposition of the soul. Reform your soul. Convert.

This may sound obvious to many; that’s consoling; however there are many who don’t understand this fundamental calling of the Christian life, or how to live out their calling. A simple conversation with them reveals all this. That’s difficult to preach effectively morality, the cross, fasting, almsgivings, praying for one’s enemies, forgiveness etc. to people when they don’t get the basics. Unless they understand love is the basis of all these, unless they become love themselves, these will be a burden on them, and homilies will sound like blah blah blah.

The little way next be patient please