Unless the blood of the martyrs watered the garden of the Church, her plants could not bear good fruit. The faith of the martyrs is the cistern that irrigates the garden that feeds Christians. Their blood is the pillar upon which the Church is built. When I read St. Ignatius’ letter to the Romans, this understanding seems to have been how early Christians perceived themselves in relation to the young Church. They wholeheartedly believed that persecution presents an opportunity for Christianity to show her greatness. The Church was able to develop and transform the Roman society only because the early Christians lived radically the gospel. Unless the church of today is willing to jettison her privilege and power to follow Christ radically, governments will continue to violate her rights until she is completely suppressed. So, what we have seen lately is only the beginning. It is also a call to live the gospel sporadically, and to make a choice for or against Christ.

As St. Ignatius was approaching Rome on his way to martyrdom, he begs the Roman Christians to not try to interfere with his death because this was the only way to get to God (chapter 1, line 2). He understood that only by a tragic death— martyrdom— will the Church be recognized as the foundation of truth, something authentic, and source of salvation. Only when the Roman leaders start seeing that people are not afraid to death will they give credit to the faith.

They could not decipher the mystery of the truth of the Church unless blood is shed, something radical. She would be ‘a meaningless voice’ (1, 2) crying in the desert of the Roman Empire if no one were willing to be offered as an immolated lamb for her. It was that understanding that spurred St. Ignatius to step forward to defend this salvific truth with his own blood. While he was like an offered lamb, while there was an altar at hand (2, 2), the whole Christian community in Rome was like a choir singing the praise of Christ in the ears of the Roman authorities. Their voices echo to the furthest corners of the Roman Empire, and the authorities start paying attention to the Church, which will eventually become the official religion of the whole empire. 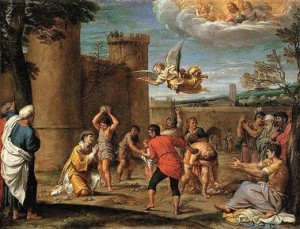 Are we comfortable with the way governments treat today as Christians? If we are, then nothing needs to be done. If we are not, then we need to start living the gospel drastically. That may mean not buying products from companies that oppose our Christians values. That may require that we don’t follow some inhuman laws although we may have to go to jail for that. We don’t even know if they accidentally make laws that contradict our Christian values, or if they merely think we are irrelevant. If the former, they should be able to easily correct it; if the latter, we must wake up. They test us and we don’t react strongly enough, and so they just keep hurting us. How far will they go? How much are we willing to accept? It is getting late Christians.

The Christians of Rome cooperate because they did not want to be the barricade that blocks St. Ignatius’ blood from watering the garden of the Church. They saw in his courageous act an opportunity for Christianity to assimilate herself with her suffering Lord. They rightly understood that he was “imitating the passion of his God” (6, 3). That imitation was not like monkey imitation. It satiates thirsting souls; it brings hope to the despairing, repose to those who know no peace; it delivers those who were held captive from the bondage of sins, and it leads to perfect joy– the joy of being counted worthy to be treated as our Lord and savior Jesus Christ. He knew what St. Francis eloquently says years later, “It is in dying that we are born to eternal life”. Thus, he says, “do not stand in my coming to life” (6, 3).

What do we learn from this letter? When the Church is in trouble, it is because her cistern is empty. When the church is challenged or under persecution, or seemingly becomes irrelevant, it is a call to live the gospel of Christ radically. She needs men and women to step forward to selflessly give themselves as the fertilizer that helps the flower of the Church to bourgeon without counting the cost. The willingness to die for the faith is a sine qua non condition for the Church to remain herself in the midst of this pervert and crooked generation.